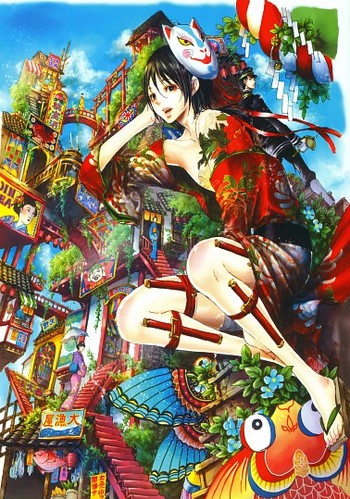 Adekan, by Tsukiji Nao, is a historical Shoujo manga set in the Meiji Era, featuring Yoshiwara Shiro, a sexy teen umbrella maker with a distinct hatred of underwear, and Yamada Kojiro, an uptight but kind-hearted police officer.

Kojiro makes it his life's goal to teach Shiro the concept of basic decency, and they become unlikely friends along the way. Nevertheless, hurdles arrive in the form of gruesome murders, abductions and other strange occurrences, and Kojiro and Shiro must solve each mystery and resolve their conundrums together.

Adekan is especially notable for its impossibly detailed art, as well as the sheer quantity of fetish-tastic Fanservice and innuendo. It's so blatant that the series could almost be considered BL, but it never really crosses the line and both main characters are canonically heterosexual.

The manga began serialization in Wings in 2007, and is still ongoing. A stage play series

produced by CLIE has been active since 2016, with four installments as of 2019.