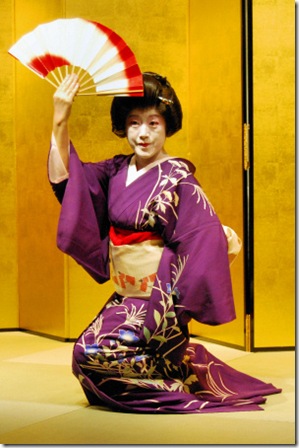 Geisha, also known as geiko or geiki, are traditional Japanese female entertainers whose skills include music and dance, fine conversation, and tea ceremony. Geisha are easily recognizable by their hairstyle, their elaborate kimono and their white make-up.

Geisha who have not yet completed their training are called maiko ("dancing girl/child"), and tend to be more colorfully arrayed than their adult counterparts, with different hair pieces for each month, and different styles according to the level of apprenticeship. A young maiko is apprenticed to an ''onee-san'' (older sister), a fully-fledged geisha whom she assists, resides with, and learns from. Traditionally, those who chose to marry had to retire from the profession, though today, some geisha are allowed to marry.

For a long time the role of the geisha has been seen as mysterious, exotic, and alluring. Contrary to popular belief, geisha are not prostitutes (that would be yuujo or "pleasure women", of which the top tier were the famous ''oiran'' or ''tayuu'', both predating geisha), but rather practitioners of the traditional arts, party hostesses and professional conversationalists, with stage names and distinct personal lives. On the other hand they weren't nuns either, as a geisha was free to be romantically and/or sexually involved with guests. Sex for money is off the menu though — back in the day, even before prostitution was banned in Japan in 1956, prostitutes had to be licensed to work as such, and geisha were licensed as geisha; a woman couldn't hold both licenses, it was illegal. That hasn't stopped them from being the object of many a fantasy.

It is interesting to consider that Maids can be considered a modern and Kawaiiko take on the job of a geisha: dancing, singing, playing games, talking with the customers. See also "Yamato Nadeshiko", the archetype of Japanese femininity.