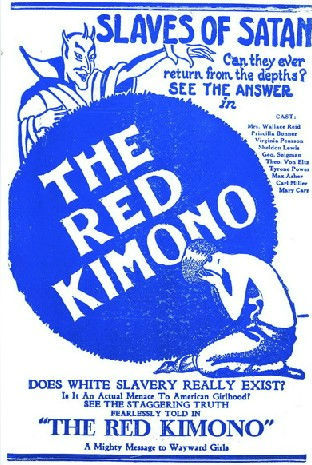 Not appearing in this film: Satan, naked women.
Advertisement:

The Red Kimono is a 1925 film directed by Walter Lang and an uncredited Dorothy Davenport (aka "Mrs. Wallace Reid").

Priscilla Bonner stars as Gabrielle Darley, who as the film starts is already a sad prostitute in a sleazy New Orleans brothel. She treks to Los Angeles to find Howard Blaine, the man who abandoned her to her fate in said brothel. After he brusquely rejects her, she shoots him in the back. Gabrielle is acquitted of murder charges but afterwards is left alone and desperate, unable to find a job and re-integrate into everyday life.

The Red Kimono was a Ripped from the Headlines story of a real case that went so far as to use the real name of the woman involved—without her permission. The Real Life Gabrielle Darley sued producer Dorothy Davenport and won a large settlement.

The title of this film is misspelled as "The Red Kimona" in the opening credits, and it is sometimes referred to by that spelling, even though the correct spelling did appear in advertising