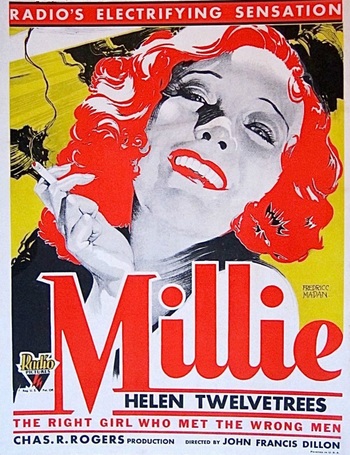 Millie is a fun-loving young woman who gets married to wealthy college student Jack Maitland. Three years go by, and the sparks have gone out of Millie and Jack's relationship, but they have a daughter, Connie. When Millie finds out that her husband is having an affair she leaves him. Millie refuses alimony, vowing to never be dependent on a man again. But she doesn't want to deprive Connie of the Maitland millions, so she leaves her daughter with Jack.

Millie gets a job at a hotel, and finds romance again with Tommy, a reporter, while fighting off the attentions of Jimmy Damier, the rich banker. When Millie finds out that Tommy is also cheating on her, she casts all morality behind, and dedicates herself to partying and hedonism.

Fast forward eight more years, and Millie's a party girl approaching middle age. She gets some disturbing news: her daughter Connie, now 16 years old, is being romanced by a man old enough to be her grandfather—Millie's old boyfriend Jimmy Damier.