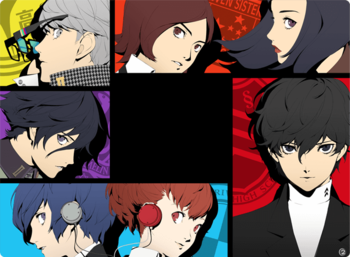 Bonds between people are the true power.
"I am thou... And thou art I."
— Arc Words for the entire series
Advertisement:

Unlike the Post-Apocalyptic Cyberpunk worlds of the main SMT series, Persona takes place in a contemporary Urban Fantasy high school setting that utilizes Anthropomorphic Personifications of Carl Jung's persona and shadow concepts as its central motif: Characters in the series use the eponymous Persona, manifestations of their own personalities, to combat Shadows and various other representations of the collective darkness in the heart of humanity. The games also employ Tarot Motifs, with Personas, Shadows and most characters divided into the 22 Major Arcana of the standard deck. Despite these differences from mainline SMT, the series still employs numerous elements from its forebear: Personas take the form of various mythological figures from numerous cultures, the games use the main series's Fusion Dance and Elemental Power systems, and entries from Persona 3 onward have variations of the Press Turn battle system from Shin Megami Tensei III: Nocturne.

Most of the games are Dungeon Crawlers where players obtain various Personas to fight on their behalf. Persona 3 also introduced numerous social/life simulator aspects to the franchise, mostly notably the "Social Links" system, which added Visual Novel-esque vignettes that enhance combat abilities as the protagonist gets to know other characters better.

Most of the games are generally Lighter and Softer and a fair bit easier than the mainline Shin Megami Tensei games, though that doesn't mean they aren't afraid to kick your ass emotionally or gameplay-wise. And be warned: these are long games, so you better have some free time.

Other works bearing the Persona name:

open/close all folders
# to D
E to R
S to Z
You were truly a remarkable guest.
Feedback

In "Persona 4," those who become your party members in the TV world end up facing their shadows - their "true selves." Facing these suppressed feelings can hurt, but by admitting the truth they gain the power of Persona.

Example of:
Beneath the Mask

In "Persona 4," those who become your party members in the TV world end up facing their shadows - their "true selves." Facing these suppressed feelings can hurt, but by admitting the truth they gain the power of Persona.