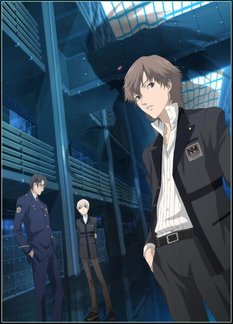 An Anime set as a very loose sequel to the popular game Persona 3 by Atlus, Persona -trinity soul- is set ten years after Persona 3 ends, approximately taking place in 2019. However, certain plot points in the actual sequel Persona 4 and official information have basically made the series non-canon, even if it includes characters from the original game.

After ten years living with their aunt, brothers Shin and Jun Kanzato return to their birth city Ayanagi to live with their older brother Ryou, as their aunt has finally found herself a boyfriend and they don't want to get in her way. However, Ryou is a very cold, almost nasty individual who quickly makes it known that he wants them to leave as soon as possible. To further that insult, he doesn't mean the house — he means the entire city and won't explain why.

Their first night in-town is spent unpacking, and when Shin takes a few minutes to check on a dream he had outside and to ultimately clear his head, he runs across a suffering individual in a warehouse. When he tries to help the man, he's attacked by a gigantic spectral monster that brings out one of his own. Between that, the group that's now attacking him, and the two largely traumatic incidents going around Ayanagi City, it looks like it's going to be a very crazy ride...

The series was released in 2008, running six months (from January to June) in its initial run. It consists of 26 episodes and was licensed and released on DVD by NIS America as part of its new anime campaign.

As of 2015, NIS America has discontinued selling the show for English-speaking territories.