Western Animation / Twice Upon a Time 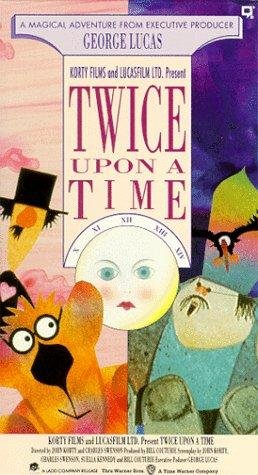 Once upon a time, there were some people called the Rushers of Din. Every night, as they slept, sweet dreams were delivered to them from sunny Frivoli, and nightmares came to them from the mysterious Murkworks. But the villain of the dark castle was not content. He wanted the Rushers to have non-stop nightmares, and for that he needed control of the Cosmic Clock. It was a time in desperate need of heroes — any kind of heroes.
—Opening Narration
Advertisement:

Twice Upon a Time is a 1983 mostly-animated comedy-fantasy directed by John Korty and Charles Swenson, and executive produced by George Lucas. As with several other animated films of the early '80s (The Last Unicorn, The Secret of NIMH), its theatrical distribution was such that it made virtually no impact...and unlike those films it didn't get much video/cable exposure either. The month it debuted on HBO, the pay channel's guide made a full page announcement - and that was the last anyone heard of it until the early 1990s, when it had a brief video release; Cartoon Network twice showed it as a weekend feature by decade's end. The film finally resurfaced on DVD in 2015 via Warner Archive.

The land of Frivoli is where dreams are made, and the land of Din is where they are taken to for delivery to the sleeping Rushers, via the jolly old man Greensleeves and his helpers the Fig-Men of the Imagination. They have an evil counterpart in Synonamess Botch, who runs the nightmare factory known as the Murkworks and sends vultures out to deliver nightmares to Rushers. (Frivoli, the Murkworks, and the residents of both are animated via illuminated cut-outs while Din is Deliberately Monochrome live-action. Rushers are what we know as humans.)

Now Botch launches a master plan: He has Greensleeves and company kidnapped, and then tricks innocent fools Ralph (an "all-purpose animal", so called for his shapeshifting abilities, voiced by Lorenzo Music) and Mumford (a Charlie Chaplin-esque mime) into stealing the spring of Din's Cosmic Clock for him. They do and this stops time in Din — at a moment when everyone is awake. Botch will send the vultures there to drop powerful nightmares everywhere, then restart the clock and detonate them, which will trap all the Rushers in waking nightmares...forever. It's up to Ralph, Mum, Greensleeves's niece/aspiring actress Flora Fauna, inept superhero Rod Rescueman, and a harried Fairy Godmother to put things to rights before it's too late.

Notable names among the crew, years before they became famous as directors, are Henry Selick (sequence director)note His future wife Heather was a background artist. and David Fincher (special photographic effects).

Not to be confused with the Doctor Who-episode of the same name.

This animated film contains examples of: