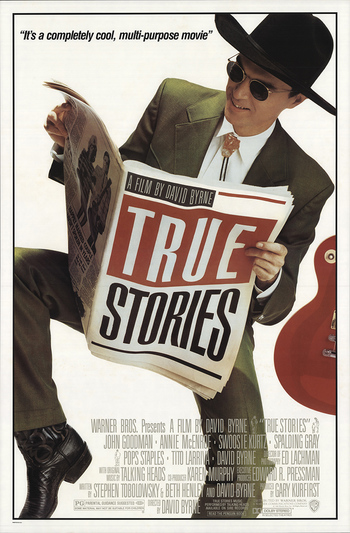 Byrne plays a Wide-Eyed Idealist who visits the fictional town of Virgil, Texas, where the Sesquicentennial of the founding of the town and the state of Texas is about to take place. He becomes acquainted with many of Virgil's quirky inhabitants, including a man obsessed with finding a potential bride (John Goodman), a married couple who live together but haven't spoken directly to one another in years, a woman who always lies and rich woman who never gets out of bed. The film's plot is rather minimal, consisting of a series of offbeat, mildly interconnected vignettes covering the lives and personalities of Virgil's residents, leading up to the celebration and it's Grand Finale, a talent show.

The film is considered by many to be a successor of sorts to Nashville or an off-kilter reimagining of Dandelion Wine.

Talking Heads recorded a tie-in album for the film, despite Byrne's protest (according to him, Warner Bros. didn't understand that the film was a musical). A separate soundtrack for the film's incidental score was also released but quickly went out of print. A complete, proper soundtrack was eventually released to coincide with the film's re-release on The Criterion Collection in 2018.