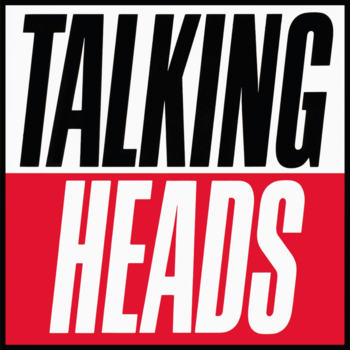 "Love is here, c'mon and try it! I got love for sale!"
Click to see the cover for the 2018 soundtrack album. 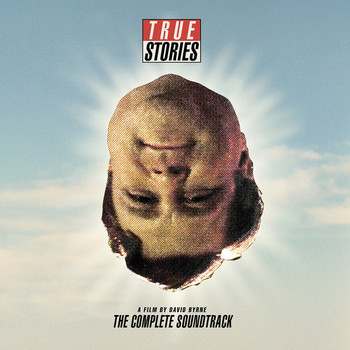 "This is not the soundtrack to the movie, True Stories. Rather, this album contains Talking Heads' versions of songs from the film. In the movie, which I directed, most of the songs are sung by the actors, and will be available on separate recordings. Additionally, the musical score to True Stories is available on Sire Records, Cassettes, and Compact Discs. Thanks, this was fun."
— David Byrne in the Talking Heads album's liner notes, explaining the complicated situation behind it.
Advertisement:

True Stories is the seventh album by American Alternative Rock band Talking Heads, released in 1986. Despite having the same name as the film released that same year, which Talking Heads frontman David Byrne both directed and starred in, and despite the fact that every song on the album is featured in the film, it is not a true soundtrack album. Only three of its songs ("Wild Wild Life" "Love For Sale", and "City of Dreams", in film order) were used as-is in the movie; the rest were re-recorded by a variety of other artists for use in the film.

The album exists solely from Executive Meddling; despite Byrne's objections, Warner Bros. (who distributed the True Stories film and owned Sire Records, onto whom Talking Heads were signed in the US and Canadanote by this time, they'd signed to EMI in the rest of the world) demanded that Talking Heads record their own versions of the lyrical songs from the movie so as to capitalize on its potential box office sales. The incidental songs from the film were concurrently compiled on a soundtrack album titled Sounds from True Stories, released solely on LP and cassette and with no reissues past the original 1986 release. A proper True Stories soundtrack album wouldn't be put out for roughly 32 years, with True Stories, A Film by David Byrne: The Complete Soundtrack releasing alongside and as part of The Criterion Collection's Blu-ray release of the film.

Regarding the Talking Heads album, True Stories continues the shift away from the eccentric Post-Punk that defined the band's 1977-1983 output, a change in sound that had been instigated by the previous album, Little Creatures. Doing away with the latter's Country Music influences (save for the penultimate track, "People Like Us"), the album presents the most mainstream-friendly album that Talking Heads ever put out, though still retaining the quirkiness from the band's prior output. At the same time however, the album also hints at the fascination with Latin music and culture displayed in Talking Heads' next and final album, Naked, as well as Byrne's solo albums Rei Momo and Uh-Oh. With the use of Gratuitous Spanish in "Papa Legba" and the Tejano influences visible in "Hey Now" and "Radio Head", the album preludes to the more expansive exploration of Latin rhythms and instrumentation that Byrne would implement throughout the turn of the decade. Thus, True Stories can be thought of as a transitional album, sitting between the country-influenced pop rock of Little Creatures and the Remain in Light-esque blend of Post-Punk & New Wave Music with Latin funk throughout Naked.

True Stories was supported by four singles: "Wild Wild Life", "Love For Sale", "Hey Now" (released only in Australia and New Zealand), and "Radio Head". "Puzzlin' Evidence" was also released as a promotional single in the US.

Peace of mind? It's a piece of tropes!