Anime / The Great Mission to Save Princess Peach! 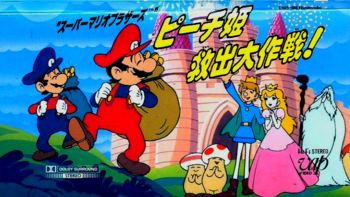 Because of how obscure this movie is, this video cover is a definite spoiler.
Advertisement:

While this film is very obscure, it's notable for being one of the first two full-length film adaptations of a video game, the other being Running Boy: Star Soldier no Himitsu, released on the same day: July 20, 1986. Both preceded the American Super Mario Bros. (1993) by approximately seven years. It was also one of the first Trapped in Another World anime. This essentially makes it the Ur-Example of the "trapped in a video game" isekai anime subgenre.

One night, while playing his Famicom, Mario gets an unexpected visit from the lovely Princess Peach, who is on the run from evil tyrant King Koopa. King Koopa then shows up and kidnaps her, leaving behind the pendant that she always wears. The next day, a little dog called Kibidango shows up at the grocery store owned by Mario and his brother Luigi (yes, they're grocers in this movie) and takes the jewel. The Mario Bros. give chase after him and wind up in the Mushroom Kingdom, where they meet the wise old Mushroom Hermit. The Mystic tells them that they've been brought to the Mushroom Kingdom to rescue Princess Peach, whom King Koopa intends to marry on Friday the 13th, and save the people whom King Koopa has turned into useless objects.

Oddly enough, the movie credited Shigeru Miyamoto as the creator of Super Mario Bros. Until the '90s, Miyamoto's identity was a very well kept secret for Nintendo, which wasn't unusual for many Japanese video game companies in the '80s and '90s, mostly for preventing industrial espionage and also for keeping their privacy.note At least for Western players. In Japan, Miyamoto's identity was already public much earlier, but until Super Mario World, he was credited under a pseudonym and not under his real name.

On April 16th 2022, an unofficial HD remaster of the movie made from one of the few surviving 16mm prints was released for free on the internet.

After a trek across the Mushroom Kingdom, Luigi becomes hungry enough to see Kibidango as a delicious dinner.

After a trek across the Mushroom Kingdom, Luigi becomes hungry enough to see Kibidango as a delicious dinner.