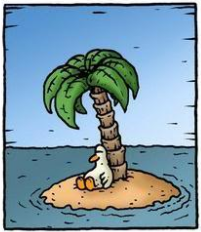 Why he doesn't just fly off is a mystery.
Advertisement:

A comedic Deserted Islandnote And also, by loose definition, a desert island that is circular with a radius of two meters or so and a single palm, coconut, banana or pineapple treenote Pineapples and bananas don't actually grow on trees, but that's a different trope. in the center. Usually has a single inhabitant. If there's more than one, they'll either be constantly arguing or one will be slowly driving the other insane in a comedic manner (Meat-O-Vision may also occur). Often features a Message in a Bottle. If the stranded are really unlucky, there will be a pack of sharks circling the island.

Should not be confused with those larger, seemingly-deserted islands with a resort on the side far from where the characters landed.

Please don't think about where the lone inhabitant is getting enough food and fresh water to live long enough to grow that spectacular beard. Or even how they survive high tide.