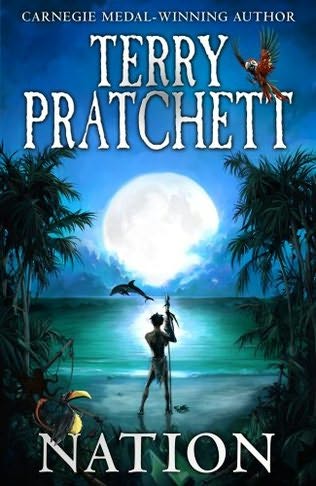 When much is taken, something is returned.
Advertisement:

On an island in the Great Southern Pelagic Ocean, Mau has just finished the rite of passage to go from a boy to a man when a volcano creates a tidal wave that crashes down on the island, killing everyone and leaving him the sole survivor of his people, the Nation. At the same time, the ship Sweet Judy has crashed, with Ermintrude "Daphne" Fanshaw as the only one alive. Her father is 138 places from being king and her grandmother has raised her to be a "Proper Young Lady Who Has Been Taught To Maintain Standards." Scared and alone, she witnesses Mau sending the dead off into the sea.

Soon, other survivors begin to arrive and more things are stirring. There will be trials, terrors, and secrets revealed, and always the forever danger of Locaha, the God of Death.

A non-Discworld book by Terry Pratchett, Nation is about survival, the power of truth, lies, science, and faith.

A stage version, adapted by Mark Ravenhill, debuted in 2009. According to Rhianna Pratchett, it was one of her father's favourite books.

The Tropes That Happen: