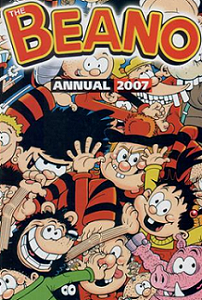 The 68th Beano Annual with a few of the longer running characters appearing on the front.
Advertisement:

The Beano is a long running British children's comic that's been in circulation for over 80 years, having entertained several generations of kids since 1938, making this one hell of a long runner. Published weekly, for over 80 years and with over 4,000 issues, it's famous for iconic strips such as Dennis the Menace, Minnie the Minx, The Bash Street Kids, and is a huge influence in (and a reflection of) British culture. Other iconic strips include Roger the Dodger, Billy Whizz, Biffo the Bear, Big Eggo, Lord Snooty, Ball Boy, Jonah, General Jumbo, Ivy the Terrible, Little Plum, Calamity James, and The Three Bears.

A number of Spin-Off comics have been released as well, including: The Beano Annual (which is released every Christmas and continues to sell 100,000+ every year); the monthly BeanoMAX; The Beano Summer Special, a yearly reprint Annual featuring content from both The Beano and The Dandy; Plug comic, a weekly comic which ran from 1977-1979 featuring as its main star one of The Bash Street Kids; and the Beano Comic Libraries, which evolved into the Fun Size Beano. Other spin-offs include a few animated series (some of which were Direct to Video) and video games.

The comic is easily the most well known British Humour Comic and is also the longest running comic of its genre. It has outlived numerous generations of competitor comics, such as Whizzer and Chips, Film Fun, Smash, and Buster, and continues to introduce new characters and innovate.

Its readership peaked in 1950 before the introduction of its most iconic characters, and some consider it to have Jumped the Shark in the mid-'60s when the artists Leo Baxendale and Ken Reid left to draw for DC Thomson's (The Beano's publisher) rivals. However, the comic continued for long after these artists stopped drawing altogether, though the pair were a big influence on the comic.

In its long run it has had no official cases of a Comics Merger, but it has absorbed a number of characters from defunct comics such as The Numskulls and Fred's Bed from The Beezer and Bananaman from Nutty and The Dandy.

Two Beano home videos have been released, the first in 1993 and a follow-up: Beano Videostars in 1994. Also, an interactive DVD in 2006, which focuses on the characters' attempts to save Bash Street School from closure after TV stars Mr. Cheekychops and Sir Stinksalot's underhand underground scheme.

Not to be confused with Blues Breakers with Eric Clapton, often referred to as The Beano Album due to the fact that Clapton can be seen reading an issue of the comic book on the cover.

ndy's demise as a print title leaves The Beano as the last weekly humour anthology comic in the United Kingdom.