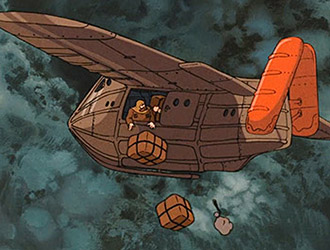 When you really need to drop a few pounds.
"Ohhh, I'll be gorrammed. That's where that cash went. I stole that money from Higgins just like the song says, lifted me one of his hovercraft. But I got tagged by anti-aircraft, started losing altitude. Had dump them strongboxes to stay airborne. Oh... 60,000, untraceable. And I drop it right square in the middle of mud-farmer central."
— Jayne Cobb, Firefly, "Jaynestown"
Advertisement:

Gravity Sucks, particularly when you are on an aircraft or balloon and face engine failure. What can you do to prevent or at least delay a crash landing? Right, you jettison your cargo.

Emergency Cargo Dump describes incidents where characters throw objects away to decrease weight or decrease ballast. This may be to prevent a faltering plane from crashing or a leaky boat from sinking. It may also be to gain speed, if the characters are in The Big Race, or trying to outrace an enemy that is in Hot Pursuit. This last example could even include persons on foot who jettison the things they are carrying.

This can lead to a dramatic situation as the characters have no choice but to get rid of some valuable McGuffin they are transporting. Or perhaps they're forced to dump their supplies overboard and end up facing starvation later on.

An occasional variation has cargo dumped to prevent some other kind of trouble (perhaps you're carrying hazardous cargo that's threatening to explode, or you're carrying contraband and the authorities are closing in to search your vessel).

Cargo deliberately thrown from a moving vehicle is called "jetsam", and is legally distinct from "flotsam", which is floating wreckage from a crashed plane or sinking ship.

See Cold Equation for similar situations where human sacrifice is required. See Disposable Vehicle Section for cases where part of the vehicle itself is ejected. Bring My Brown Pants is a biological response to stress designed to lighten a body's load/cause a distraction for a quick getaway. Completely unrelated to Dramatic Drop.

A plane carrying picnic supplies is forced to jettison its cargo to keep it from crashing into the kelp forest. Coincidentally, it all lands neatly in front of SpongeBob, Patrick and Squidward.

A plane carrying picnic supplies is forced to jettison its cargo to keep it from crashing into the kelp forest. Coincidentally, it all lands neatly in front of SpongeBob, Patrick and Squidward.