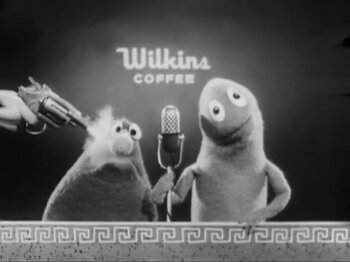 "Things just seem to happen to people who don't drink Wilkins!"
Wilkins: Okay, buddy, whaddaya think of Wilkins Coffee?
Wontkins: I never tasted it!
(Wilkins, armed with a cannon, fires at Wontkins at point-blank range, then points the cannon at the camera)
Wilkins: Now, what do you think of Wilkins?
— Typical scenario for a Wilkins Coffee commercial
Advertisement:

In 1957, Jim Henson created a series of commercials for Wilkins Coffee, a local brand in the Washington, D.C. area (Henson was from DC's inner-ring Maryland suburbs and was studying at the nearby University of Maryland-College Park at the time). The ads featured two early Muppet characters—a lizard-like creature named Wilkins (who vaguely resembles Kermit the Frog without his iconic collar note though contrary to popular belief, is not a prototype of Kermit, who existed at the same time as these ads ) and a blob-looking creature named Wontkins. These commercials were made for local television stations, which only had ten seconds for station identification. As such, the Muppet commercials had to be lightning-fast — essentially, eight seconds for the commercial pitch and a two-second shot of the product. From 1957 to 1961, Henson made around 180 commercials for Wilkins Coffee and other Wilkins products, including Community Coffee and Wilkins Tea.

The cheerful Wilkins loved Wilkins Coffee, while the grumpy Wontkins hated it. As punishment for refusing to drink the coffee, Wilkins would often do serious harm to Wontkins in the ads — blowing him up, stabbing him with a knife, and smashing him with a club, among many other acts of Family-Unfriendly Violence.

After the Wilkins Coffee advertisement campaign, Wilkins and Wontkins were used for other brands, such as Nash’s Coffee, Kraml Dairy, Taystee Bread and Faygo. The last ads featuring Wilkins & Wontkins were produced in 1969 for Community Coffee, just around the time Henson started work on Sesame Street. Though the characters have not reappeared in over 50 years (as of 2021), they remain an important part of Muppet history, as they represent Jim Henson's early success in the advertising industry, and with the advent of video-sharing sites like YouTube, and the unearthing of previously lost content from channels on the site, the Wilkins and Wontkins commercials are perhaps more popular than ever.

Many of these adverts have been cobbled together on various videos