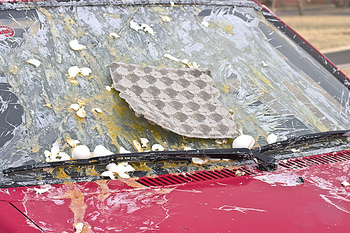 The yolk's on him, but someone is going to have to shell out for eggs-pensive repairs
"I looked out the window and seen his bald head
I ran to the fridge and pulled out an egg
Scoped him with my scopes he had no hair
Launched that shot and he was caught out there"
— "Egg Man" by The Beastie Boys
Advertisement:

A common "prank" performed by punk kids in media (particularly during a Halloween Episode that makes mention of "Mischief Night") is throwing rotten eggs at people, their cars, or their houses. This can end up damaging peoples' property at worst, and making them smell bad at best.

Typically depicted with the Toilet Paper Prank. Related to Produce Pelting, where eggs are a common choice.