There is a new archive of this comic at http://retailcomics.com

. All current and future links to specific comics need to be modified to link to the comics there. 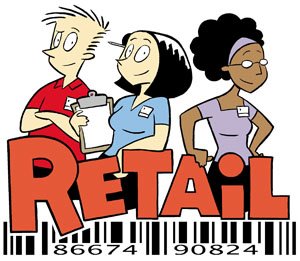 "Yeah, I couldn't possibly be right about anything. I'm wearing a nametag."
— Marla Masters
Advertisement:

is a comic strip created by Norm Feuti (also the creator of Gil) that ran from 2006 to 2020. Set in a fictional store called Grumbel's, it's a satire of the world of minimum-wage department store jobs.

The strip centers around an assistant manager (later promoted to store manager) named Marla Masters (later Marla Garrison). While she's a good boss, she can't stand the bureaucratic nonsense set by the corporate offices, the intolerant and abusive customers, the ditzy and spaced-out employees, and the stigmas associated with retail workers. Other than that, she likes her job.

Marla is most often seen working alongside Cooper, a stock boy with a sarcastic wit, geeky tastes and a dim outlook about his job; Val, an aspiring writer and encouraging friend of Marla's who wants her to move onto bigger and better things; and Stuart, the store manager (later District Manager) who sucks up to his superiors, follows every rule to the letter, and is a generally ineffectual boss.

Feuti has written a book based around Retail, called Pretending You Care: The Retail Employee Handbook. "This Is So Bogus My Head Hurts", a collection of the strip's first year, is available here