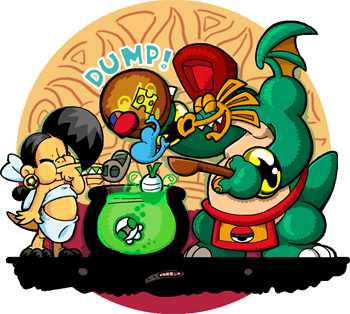 The princess and the Dragon
Advertisement:

Restaurant Macoatl (or just Macoatl) is a longstanding Mexican comic strip and webcomic about a Dragon who decides to open a restaurant in the Prehispanic land of Coatlan (which is basically a World of Weirdness with a Mexican spin to it). It could also be called a prehispanic take on The Flintstones.

The story takes place in a world were humans live along with the The Coatlaltecas, a race of feathered snake people who used to live inside the sealed city of Coatlan. After the fall of the city and now in the human world, Checomal opens a restaurant with the help of Ichuel, his waitress; Xio, the kitchen helper; Kaira, the former princess of the city, and Tik. The strip is a mix of gag-a-day strips and an adventure series. It can be found here

or if you do speak Spanish here