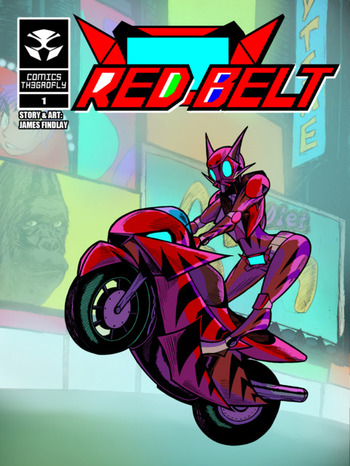 is a webcomic drawn and written by James Finlay, featuring superheroes, action, and a whole lot of references to Tokusatsu in every other page.
Advertisement:

In the futuristic Neon City, a smartphone app called "Unleash the Beast" can allow anyone who downloads it to transform into an animalistic monster known as a Chimeraman, giving them superhuman abilities and letting them do what they will. Combatting them is the superheroine Alexis Reyes, who can transform into Red Tiger, and take their abilities upon defeating them. However, she's not alone in her efforts, accompanied by the cocky and talkative sniper, Green Hawk, who's simply in it to snag the abilities of the Chimeramen, and the silent and serious blade wielder Blue Shark, who's not willing to talk anytime soon.

The comic updates with a page once a week, feauturing hyper-stylized art to compliment the insane tokusatsu-style action. Not to be confused with the similarly-named film.