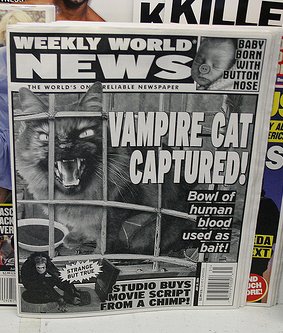 And the bidding war for that script was bananas!
Clone of Benjamin Franklin: Why do you have your barber on emergency speed dial?
Dr. McNinja: I don't know? Because life is crazy?!
— The Adventures of Dr. McNinja
Advertisement:

Guess what? Remember last week when the Devil possessed our resident alien when we killed that vampire? Well, this week we've got time traveling wizards on our tail! Good thing we acquired those Psychic Powers from that black monolith two weeks ago, eh?

…basically, every concept or creature that was ever touched upon in popular culture is not only real, but has a vested interest in the main characters. However, despite the rampant weirdness, everything superficially appears to be identical to the present day.

Distinguished from comic book settings in that in comics, the unusual is used as a plot device ("This guy comes from space, and that's why he has powers!"), whereas World Of Weirdness uses it as a plot enabler ("This guy went to space on his vacation, and all he got was this stupid T-shirt!").

Often comes hand-in-hand with the Law of Conservation of Normality. Often develops a complex and nuanced Crossover Cosmology. Use of this in a serious manner with separate explanations of how all of the weirdness came to be turns it into a Fantasy Kitchen Sink. Magic A Is Magic A can generally be assumed to be completely averted. If the weirdness has a detective/thriller angle to it, may also overlap with World of Mysteries.

This trope was originally named "Planet Eris" after the goddess of Chaos in Principia Discordia, the prime text of the Discordian religion. Also relates to the original Ancient Greek mythology version of Eris as the goddess of discord, strife and quarrels. Look up the The Iliad (especially the Judgement of Paris scene) for one of her most famous roles therein, you know the Original Snub and 'For the Fairest' and the Golden Apple Corps. Not to be confused with Eros, god of sexual love and beauty, or Ares, god of war, or Chaos/Khaos/χάος, who was the void before the creation of gods and earth. Yeah, Greek Myth was involved. Suffice to say Eris is the embodiment of the modern term chaos, discord and the fun stuff.

See also Urban Fantasy for the genre use of this trope.

This is the most common setting for the Flat-Earth Atheist.