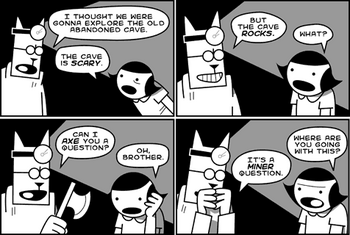 "Well... I had an Uncle Richard that tried to bring nude theater to a festival in Waterdeep... Exposure is usually good for an actor's career, but even so, a cold reception for the play caused the cast to shrink steadily. Blackballed, my uncle tried to recruit from the thieves' guild, but they wouldn't let their nick-ers go. 'Just bare with me,' he would say, but they were afraid of being stripped of their dignity. He gave up the lead to attract new members, and eventually, the production's genius was uncovered, even with his part left out."
— Jan Jansen, Baldur's Gate II: Throne of Bhaal
Advertisement:

A sudden, protracted volley of puns. Approach this technique with caution, as viewer nausea (or a lynch mob) may be a side-effect.

In a Sitcom, a Hurricane of Puns often appears after one or two characters have done something embarrassing and decide to not talk about it. Naturally, every conversation they have is rife with unintentional puns and Freudian Slips that go unnoticed by others but drive them to sheer panic.

On the other hand, sometimes these storms approach from the opposite direction... One person cracks a pun, another feels the urge to one-up it, and so it goes until the ammunition is exhausted and the puns fall silent.

Rarely, someone will just rattle off a string of puns for the hell of it.

Puns are a dangerous form of comedy, and it takes a good hand to make them into something that won't incite a mass groan of disapproval. Doing this repeatedly is even riskier, as it requires an amazing level of ability to play straight on most television aimed at mature viewers.

In anime, the Gag Series is also famous for using the Hurricane of Puns. Japanese comedy is quite fond of puns and malapropisms, because of how certain words and names in the Japanese language can be misquoted or alternatively written. This is one reason why many Widget Series don't translate into other languages very well or get treated to a Gag Dub instead. Puns that must be explained usually end up not being funny. (Woolseyism is when it does work out, usually with the dub replacing the jokes with more local ones that are the same in spirit instead of sticking to a literal translation.)

This is a subtrope of Rapid-Fire Comedy. Compare Hurricane of Euphemisms, and see Just for Pun. See also Cliché Storm. For a person who loves making puns, see Pungeon Master. Has nothing to do with Tornado Move. Volleying Insults are prone to feature these.

In one case, her puns get so obscure (and reliant on Japanese) that one of the other characters decides to break the Fourth Wall to explain them.

Megumi: Who knew this show could be so educational?

Honey imagines Max coming up with a bunch of 'square jokes' on account of her new botched hairstyle.

Honey imagines Max coming up with a bunch of 'square jokes' on account of her new botched hairstyle.