Give praise to Satan! He has won! 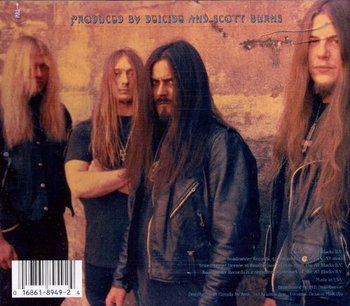 Classic line-up. From Once Upon the Cross.
Influences:
Advertisement:

Deicide are an American Death Metal band forming in the late 80s. They got their start sometime in the mid-80s as Carnage, a cover band comprised of the Hoffman brothers and Steve Asheim that played Slayer, Exodus, Celtic Frost, and Dark Angel covers. At some point later on, Brian Hoffman called Glen Benton in response to an ad that the latter had placed in a local music magazine. Benton accepted the offer, and they got together writing music under the name Amon; within a month, they had recorded the crude Feasting the Beast 8-track demo in Benton's garage and had started playing the occasional gig in the Tampa area. In 1989, Amon recorded their second demo, Sacrificial, at Morrisound with producer Scott Burns.

After signing onto Roadrunner Records, the band's name was changed to Deicide at their request, then they finally got to the recording of their Self-Titled Album, and they had gotten along since then...

Until 2004, when animosity between the Hoffmans and the rest of the band that had been building for years came to a head and resulted in the Hoffmans leaving, with Dave Suzuki and Jack Owen being live replacements for the band. Afterwards, Ralph Santolla joined the band full time for The Stench of Redemption, only to leave later to join Obituary. Afterwards, The band wrote Till Death do Us Part as a trio with Santolla contributing session leads.

In 2009, they signed with Century Media, following the return of Santolla for To Hell With God. Santolla left again, begin replaced by Kevin Quirion (who had been an on-off live fill-in for some time and had also played with Asheim in Order of Ennead). They finished a new album called In the Minds of Evil, which has been released on November 25, 2013.

At some point in 2016, Jack Owen either left or was fired (his version of events was that he was let go of after finishing up a tour filling in for Carach Angren on guitars), and Mark English (Monstrosity) took his place. A new album is in the works for a prospective 2018 release, and as of February 2018, they are finishing it up. Overtures of Blasphemy was released September 14, 2018.

Where's my crucifix? I CAN'T TROPE WITHOUT IT!