Not actually Ken Ashcorp, but Kenny, his mascot. 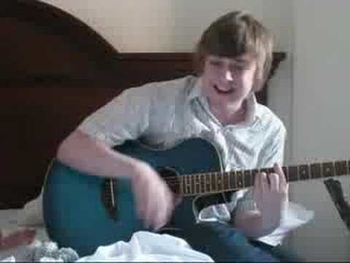 Actually Ken Ashcorp.
Wendy's just another silly girl I knew but those days are all long gone
If you were right the first time then how could you be wrong?
"Burgz"
Advertisement:

Ken Ashcorp is a internet musician (singer, songwriter, guitarist) who resides in the British Virgin Islands. Originally he made songs ranging from a little over a minute to several minutes in length, and from straight humor to more serious topics under the youtube channel name foreverpandering, that is until he deleted his channel and went on to make a different line of music under his name, Ken Ashcorp, on youtube.

His songs typically use another work, franchise, or focus as a theme to reference from throughout the song, not as parody but as a song with its own message that is made only more clear by knowing the original work, sometimes revealing double meanings and occasionally even spoilers that would've otherwise gone unnoticed. Comparisons can be drawn to Area 11, such as their song "Euphemia", which is based on Code Geass.

The reason for his shift from the first channel to his current one was based on the regular criticism he received in YouTube comments on his being apart of the Furry Fandom, the same reason why his current channel's comments are disabled. Opinions vary greatly on his decision to to this as well as his taking on Kenny as his mascot and his new sound of music, which is more conventional and professional, though still not mainstream like his original work.

, bought on iTunes, and both at Bandcamp

. His new music and some of the videos he took down can be found on a playlist here

. He also has a small following on twitch

Tropes found in his Music: