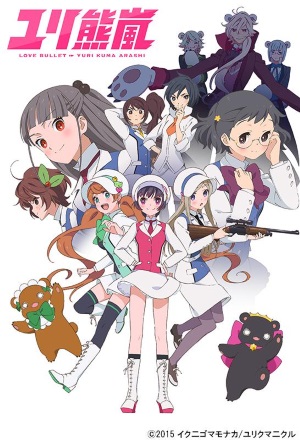 We bears eat humans. That's just the way we are, growl!
Advertisement:

One day, the planet Kumaria exploded, sending fragments of rock hurtling down to earth. This meteor shower caused all of the bears on earth to suddenly rise up and start feasting on humans. As a result, the Wall of Severance was built, protecting the humans from the bears.

Safely within the confines lives Kureha, an ordinary girl who is devoted to her girlfriend, the sweet Sumika. Unbeknownst to her, two bears infiltrate her class at school as humans in order to eat more girls; one of whom, Ginko, is immediately attracted to Kureha's delicious scent. Kureha vows to protect Sumika from any trouble, but soon, Sumika is captured and eaten by bears. Kureha is enraged, so when she gets a call telling her that her love for Sumika can be proven if she meets a couple of bears on the school's roof, she races to meet them, gun in hand.

There is also a manga adaptation written by Ikuhara and illustrated by Morishima that ran from 2014 to 2016 in Comic Birz; however, it tells a different story and gives some of the characters different personalities.