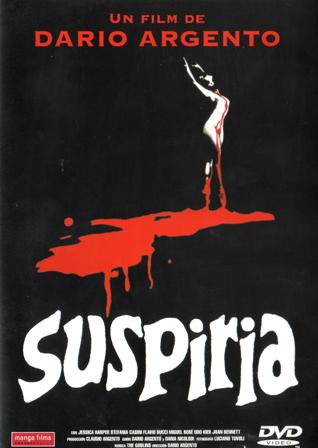 "The only thing more terrifying than the last 12 minutes of Suspiria are the first 92."
— Tagline for the US release
Advertisement:

Suzy Bannion (Harper), an American ballet student, goes to perfect her art at a dance academy in Freiburg, West Germany. On the night of her arrival, however, one of the school's students is brutally murdered. As Suzy adjusts to her new life in school, she's soon overwhelmed by a series of strange and nightmarish events, causing her and fellow student Sara (Casini) to suspect that something very evil is lurking in the dance academy.

Probably the most famous of Argento's films, Suspiria is widely known for its dazzlingly surreal visuals, evocative soundtrack by Progressive Rock band Goblin, and shocking gore. It's the first installment of Argento's Thematic Series "The Three Mothers," which also includes Inferno (1980) and Mother of Tears (2007).

Luca Guadagnino directed a loose remake that was released in 2018, starring Dakota Johnson and Tilda Swinton, and scored by Thom Yorke.