Visual Novel / Yami to Boushi to Hon no Tabibito 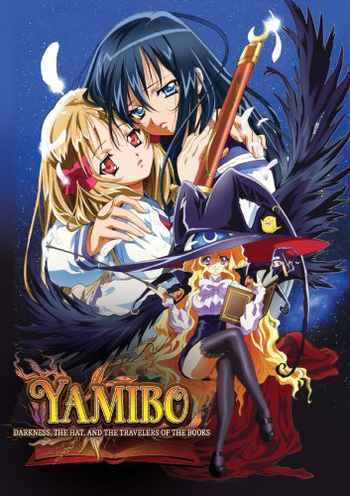 Yami to Boushi to Hon no Tabibito (Yami, the Hat, and the Book Travellers), a.k.a. Yamibou

The Great Library: A place where every world is maintained within books. By and large, people can live out their entire lives without ever knowing it exists.

Azuma Hazuki was living out her life as a fairly Ordinary High-School Student in one of these worlds, until her adopted sister, Hatsumi, disappeared at midnight on her sixteenth birthday. Intruding immediately on her shock was a bird-like being called Ken-chan, which had been sent by its master to find someone called Eve...

Yamibou is, simply, the story of the people whose lives were touched by Eve as she travelled through the worlds contained in the books of the Great Library, and their continued attempts to find her. From Lilith, the current guardian of the Great Library and caretaker of its books (that's supposed to be Eve's job); to Gargantua, whose life was forever altered when he witnessed Eve's apparently magical powers during her stay in his world; and finally to Hazuki, who loves her adopted sister and sought to find her at any cost; each had their own reasons to search.

Many have called Yamibou a watershed moment for serious lesbain moments in anime (though it's been played as comedy since at least 1999 in Steel Angel Kurumi, and probably earlier), the recent rise of yuri in anime can easily trace its beginning to the late-2003 run of this show. Humorously enough, many of the people who watched the show for just that reason, and who had glowingly referred to it as the defining shoujo-ai series, absolutely despised the ending. (Several have since attempted to pass the mantle of "defining yuri series" to Destiny of the Shrine Maiden.)

Yamibou is based on an "H"-game by Root with artwork done by Carnelian. The original game's plot is vastly different, lacking much of the yuri due to starring a nameless male main character (who was completely eliminated from the anime.)

Alternative Title(s): Yami To Boushi To Hon No Tabibito