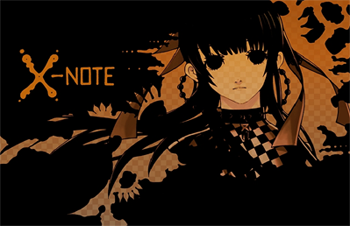 Ten years ago, Essi's mother died in a questionable accident. She left a USB flash drive with a locked folder called "X-note". Unable to understand the purpose of it, Essi continued living her life as a normal junior high school student. However, Essi is hardly normal, for she possesses power beyond normal human.

Essi's quiet life was interfered by a sudden visit of a young man named Yuon. He invited her to investigate a murder case and a mysterious disappearance in Xen Institute, a school that had a deep relation with Essi's mother. Tempted by the possibility of unlocking "X-note" and solving her mother's mysterious death, Essi decided to take his request. But what awaits her there is much more than what she could possibly imagine…

X-Note is Zeiva Inc's second commercial Visual Novel, which, unlike Other Age: Second Encounter, is written in the format of an Otome Game. Here you follow the story of Essi as she pursues the truth of her mother's death. The game spans for 30 days, of which you can train Essi's psychic abilities, explore the school, collect notes, and make choices to determine her fate. The game can be found on Steam.

It has a prequel/spin-off in the form of Area X.