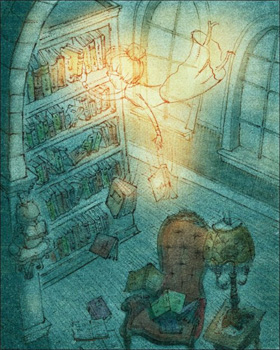 Books and libraries in fiction can be mystical things; keepers of information, certainly, of secrets and sometimes of magic, as well. It's natural, therefore, that some authors like to spread some of that magic onto the librarian, too—when they aren't making them hot or scary, that is. A magic librarian will very often have the ability to send readers (or people who either don't read or disparage books, to teach 'em a lesson) into the world within the books, and sometimes, pity those who don't return their books to the library before the due date.

Often overlaps with Hot Librarian, Scary Librarian, or possibly even both.

If the librarians work at a Spooky Silent Library, they may also be Evil Librarians.