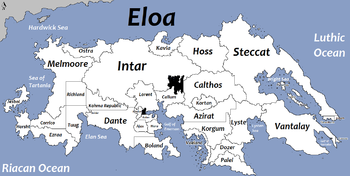 The map of the Eloa continent. The two shaded countries are Atreya and Sair, which are important enough to get dedicated maps

After meeting his untimely death, Hector is restored back to (un)life by the reaper Garovel as his servant. Armed with supernatural strength, newfound abilities and crippling social anxiety, they set out to save those in danger of dying violent deaths.

The scope of the story begins fairly small and grows steadily over time, eventually following many more characters than just Hector. It also takes place in a modern Constructed World with some medieval themes. Praise for the story usually brings up its characters, worldbuilding, action scenes, and/or sense of humor.

The story is an ongoing serial and is being updated by ~500 words every night at midnight EST. To get a feel for its current length, see the Table of Contents here

Has been on unanounced hiatus since May 2021.