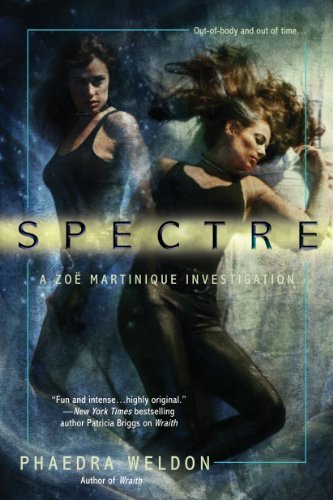 The Zoë Martinique series by Phaedra Weldon stars a young woman named (unsurprisingly) Zoë Martinique. A few years before the start of the story, as a reaction to the trauma of being raped and almost murdered, she developed the ability to leave her body at will and go wandering around as a spirit. She uses this ability to work as a private detective.

On one mission, she feels something strange and wanders off to find a strange man in the middle of murdering someone. The killer sees her and touches her, leaving a strange mark on her and turning a lock of her hair white. After that, she gets involved in a bunch of strange events, and discovers a great deal about the nature of her powers.

The series consists of four books so far: Wraith, Spectre and Phantasm and Revenant