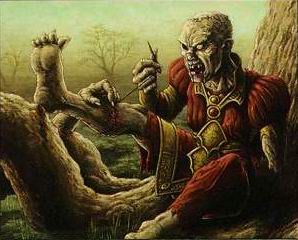 not included.
"My brother, Melchiah, was made last, and therefore received the poorest portion of Kain’s gift. Although immortal, his soul could not sustain the flesh, which retained much of its previous human frailty. This weakness, it seemed, was passed on to his offspring. Their fragile skins barely contained the underlying decay..."
— Raziel, about Melchiah and his clan being a hybrid of Type I/III, Legacy Of Kain: Soul Reaver
Advertisement:

Generally speaking, if it's dead, it rots. What's more, corpses become more fragile than when alive (rigor mortis notwithstanding), and it goes without saying that they can't heal injuries or damage.

But what of The Undead? They aren't really dead, but they aren't alive either. So what does that mean in terms of healingnote  (Not to get into the other biological processes. Like, do zombies poop?)? Well, since Our Monsters Are Different, it can mean any of the following along a spectrum of options. Sometimes multiple options if there is a whole undead ecology.

It's worth noting that "No Rotting" includes preserving muscles, bones, and ligaments despite everyday wear and tear. This is often implied of many perpetual motion zombies said to never die. Another variable is just how much and how "neatly" the healing is. Some undead just have enough healing to patch themselves up over a long period, leaving massive and ugly cancerous scars. Others have a full on Healing Factor that leaves no scarring, effectively locking their appearance forever.

Their healing is never strong enough to bring them back to life, just back to "fresh corpse"note  (If it did, it would kind of defeat the point). Also note that no matter how powerful an undead's healing ability, it is always of the "blasphemy against nature" variety, so Revive Kills Zombie.