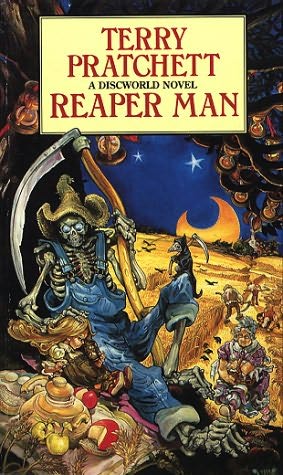 WHAT CAN THE HARVEST HOPE FOR, IF NOT FOR THE CARE OF THE REAPER MAN?
— The Death of Discworld
Advertisement:

This is the 11th Discworld novel. It was written at the same time as the Bromeliad trilogy, and it shows: both works talk about how beings with short life spans live them faster than humans, so everyone's lifespan is subjectively about the same. Both also use mayflies as an example.

Unusually, there are two almost completely separate plots, and they are even denoted using two different typefaces (most noticeable in the first hardback edition).

The primary plot involves Death. His cosmic bureaucracy, the grey and numberless Auditors of Reality, sack him for getting too close to humans, and Death is sent to live as a mortal instead. Will Death get his post back, or will he have to face his own mortality?

The B-plot focuses on the consequences of what happens when Death Takes a Holiday (or in this case, is fired). Too much life force floods through the world, the recently dead arise as zombies, and metaphorical ideas are powered into life as the ancient (and recently deceased) wizard Windle Poons struggles to deal with the consequences.

The title is a pun on Repo Man.

Preceded by Moving Pictures, followed by Witches Abroad. Preceded in the Death series by Mort, followed by Soul Music.

I REMEMBER WHEN ALL THIS WILL BE AGAIN.