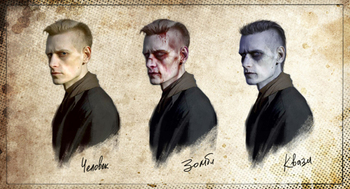 How to tell (left-to-right): human, Risen, Quazi
Quazi (Кваzи) is a 2016 novel by the Russian sci-fi and fantasy author Sergey Lukyanenko. This is the author's first novel about zombies.

The novel takes place ten years after a Zombie Apocalypse in 2017, In a World..., where surviving humans live side-by-side with hordes of ravenous and mindless Risen and the intelligent Quazi (the "z" is intentional). Any time a human dies and the body is at least 50% intact (especially the brain), the person comes back to life as a Risen with a hunger for living flesh. Eventually, some Risen may remember who they are and become Quazi. After the early years, the vast majority of humankind (6 billion) roams the lands as the Risen. Just over 100 million Quazi coexist with humans, sometimes forming their own nations and sometimes living among us. In Russia, Moscow remains the bastion of the living with fortifications in place along the Moscow Ring Road and armored trains providing transportation between cities. The Russian Quazi are centered around Saint Petersburg, their capital.

Both the Risen and the Quazi are much stronger and faster than humans, able to leap down from several stories high without sustaining much damage. They also have a high Healing Factor, although it's not very quick.

Denis Simonov is a Moscow cop and his precinct's only Mortal Affairs Inquirer. His job is to show up to scenes with potential fatalities and immobilize or, if necessary, kill any newly-Risen, while they're still sluggish and disoriented. After immobilization, any Risen is supposed to be handed over to the Quazi, who treat the Risen as their children and can exert some control over them. However, Denis has a special hatred for all undead over the loss of his wife and son during the apocalypse, so a lot of his visits end up with Risen being permanently killed "out of self-defense". Suspicious, his Da Chief partners him up with a Quazi cop named Mikhail Bedrenets, who has just arrived from Saint Petesburg on a special assignment from the Representative (the leader of Russia's Quazi). Denis is forced to work side-by-side with Mikhail and learns to overcome his prejudices. At the same time, he knows that Mikhail is hiding something. He is also surprised to learn that Mikhail has a living son named Nayd (short for "naydenysh" - "foundling"), whom he found shortly after becoming self-aware again during the apocalypse.

The reluctant partners investigate the case of Professor Victor Tomilin, a biologist ostensibly studying chickenpox. The Professor was killed in his apartment, after which his killer supposedly waited for him to Rise and attack him. Both Risen were then beheaded by Denis in "self-defense" at the beginning of the novel. Denis and Mikhail then discover that Tomilin's wife Victoria, also a biologist, is a Quazi, which is a strange pairing, since Quazi tend to be emotionless and don't feel love for anyone. Mikhail quickly figures out that Victoria sent the hired gun to kill her husband in order to, eventually, turn him into a Quazi in his 30s instead of a weak old man. Victoria manages to flee custody, forcing Denis and Mikhail to try to figure out her endgame. Along the way, there is Jurisdiction Friction between them and State Sec, who keep trying to take over the investigation.