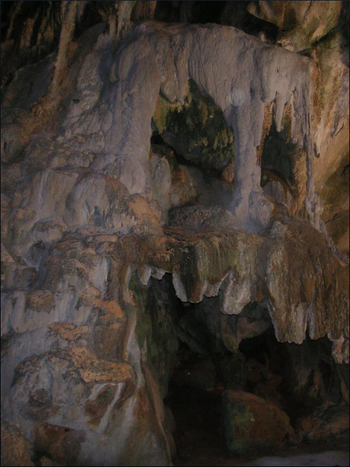 "Just giggle at the ghosties!"
Advertisement:

Pareidolia is the human tendency to mistakenly interpret random visual stimuli as meaningful. More specifically, it entails seeing faces in inanimate objects. Does the door of that house look like a mouth, those two windows above the door like eyes, and the keystone of the door like a nose? That's pareidolia. The object in question isn't a face, nor was it necessarily intended to resemble one, but that's what the human brain has evolved to instinctively perceive certain arrangements of shapes as. Combine this tendency with humans' tendency to be afraid of the dark — on the grounds that humans are vulnerable to predators in the dark — and you get this trope.

A character (most commonly a young child) is alone in their bedroom, or in a basement, or a forest, or a cave, or somewhere similar, at night (or otherwise in the dark). Increasingly frightened, they begin imagining threats in the form of inanimate objects appearing as monsters. Shadows are cast on surfaces in just such a way as to create scowling faces. Tree branches resemble scraggly claws. Stalactites and stalagmites appear as teeth and indents in the rock as eyes. And as the character's pulse and pace quicken, they'll start seeing more, and more, and more, until they're completely surrounded by monstrous impressions and terrified... whereupon someone will turn the light on, and they'll realize that all those teeth and claws were just rakes and pitchforks hanging on the wall of the garage.

This only applies to everyday objects such as trees or rocks or furniture happening to resemble monsters. If it turns out there's an actual, literal monster stalking the character, it isn't an example. (Sometimes, a character might think something is a monster, verify that it's just an inanimate object, only for it to then turn out that, no, actually it really was a monster after all). This also doesn't encompass objects purposely-sculpted so as to resemble monsters, such as statues. Can overlap with Beware the Skull Base, if the base is in a natural formation (such as a cave) resembling a human skull rather than intentionally built or carved to look like one.

Most common in Western Animation. A rich source of Nightmare Fuel.

See also: Scary Shadow Fakeout and Things That Go "Bump" in the Night. Often overlaps with Cave Mouth, It Kind of Looks Like a Face and The Trees Have Faces.