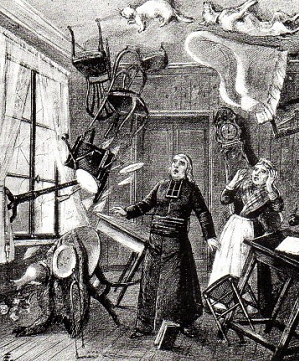 A poltergeist (from the German polter, meaning "to rumble", "to make a noise" and geist, meaning "ghost" or "spirit") is a type of ghost or other supernatural entity that manifests by creating noise or moving objects.

While the term itself comes from German, poltergeist activity has been reported in nearly every culture, becoming part of the folklore in India, the United States, Japan, Brazil, and other countries. Several scientific theories regarding poltergeist activity have been proposed, including tremors, air currents, ultra-infra sound waves or unexplained losses of gravity, though true believers maintain that there is no stable scientific explanation for poltergeists. The, uh, not so scientific theories vary between ghosts and nonconscious, uncontrolled telekinesis.

For the movies of the same name, go to Poltergeist.