Professionals Do It on Desks 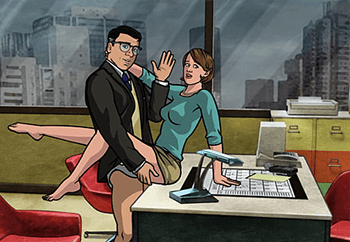 Hello!
Normally, people in a professional line of work must keep their romantic inclinations in check at the office. However, sometimes, in the heat of the moment, UST simply must be resolved. They're at the office, so might as well just do it on the desk. This may or may not involve Necktie Leash kissing or the wanton shuffling of papers onto the floor to make way for some "pencil pushing". Can be used to show the otherwise-professional letting their hair down, or as an insult to the boss or someone else in a position of authority.
Advertisement:

A subtrope of Making Love in All the Wrong Places. See also Sex at Work.