Film / A Tale of Two Sisters 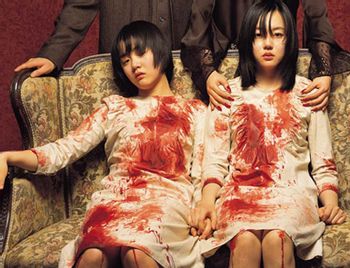 "Do you know what's really scary? You want to forget something. Totally wipe it out of your mind. But you never can. It can't go away, you see. And it follows you around like a ghost.”
— Eun-ju
Advertisement:

A Tale of Two Sisters (aka Janghwa, Hongryeon, literally Rose Flower, Red Lotus) is a 2003 South Korean psychological horror film by Kim Ji-woon. It is both the highest-grossing Korean horror film and the first to be screened in American theatres.

The film centers around two teenage sisters, the older Su-mi and the younger Su-yeon, returning to their father Moo-hyeon's house after a stay in a mental institution following the death of their terminally ill mother. They frequently clash with their new stepmother (formerly their mother's nurse), Eun-ju, who behaves in an incredibly difficult manner around them (and who becomes increasingly cruel and erratic over the course of the film). Coinciding with their return home, however, are several eerie and frightening events (doors opening by themselves, bizarre apparitions, strange sounds, and terrifying nightmares, amongst other things), and it quickly becomes uncertain if these events are real, a product of the girls' disturbed mental states, or the cruel mind games played by Eun-ju. Or is it something else entirely?

Known for having multiple unexpected plot twists and being very open to interpretation.

Definitely not to be confused with A Tale of Two Cities.

Warning: Some unmarked spoilers below.