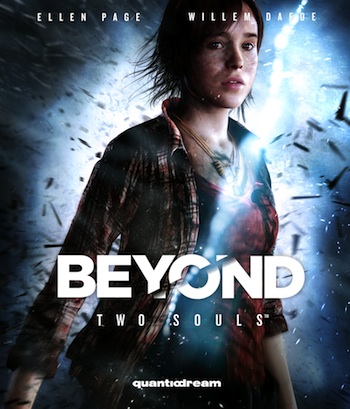 What will you do with power from beyond?
Advertisement:

Beyond: Two Souls is the third installment in Quantic Dream's "interactive movie" game series, following their Fahrenheit (Indigo Prophecy in some countries) and Heavy Rain. Its story, covering the span of fifteen years (and wholly unrelated to the two aforementioned games), centers on a young woman named Jodie Holmes (modeled after and played by Elliot Page) who tries to uncover the mystery of a strange poltergeist-like presence serving as her protector as well as Nathan Dawkins (Willem Dafoe), a researcher who serves as her surrogate father. The central topic of the game is what happens to one after death. Like its immediate predecessor, Beyond: Two Souls was a PlayStation 3 exclusive, though it received an Updated Re-release for PlayStation 4 in November 2015.

In March 2019, it was announced that the game would be coming to PC later that year, exclusively via the Epic Games Store for the first 12 months; Quantic Dream is self-publishing this port.

See also KARA for the tech demo produced in preparation for this game.

Beyond: Two Souls provides examples of: