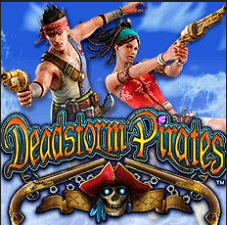 Deadstorm Pirates is a pirate-themed Light Gun Game from Namco. Players take control of two pirates named Eric and Leah, part of a crew that is looking for a treasure said to be aboard a lost galleon known as Poseidon's Breath. To do so, they must brave supernatural enemies who guard the island where the Poseidon's Breath awaits, including Captain Vincent, the former captain of the ghost ship. Luckily for this band of adventurers, Eric and Leah have the rare weapons, the Golden Guns, and are more than ready to take on all comers.
Advertisement:

The game itself is fairly standard so far as Light Gun games go, though it offers a few unique mechanics; For one, the game actually encourages teamwork, placing them in situations where it is more ideal for one player to focus on taking out weak points on a boss, while the other keeps enemy swarms at bay. The players may also focus their crosshairs on one small area of the screen, which will cause their two crosshairs to merge into one that deals bonus damage on enemies, making it useful for attacking more durable enemies. Some cabinets are also equipped with a "Ship's wheel" mechanism, a free-spinning wheel between the two players which must occasionally be used to dodge attacks, charge their own attacks, or steer a vehicle away from obstacles and hazards.

The game hit the arcades in 2009 and was ported to PlayStation 3 using the Move controls as a bonus game to Razing Storm, along with Time Crisis 4, and as a stand-alone title on the PlayStation Network. An Updated Re-release labeled "Deadstorm Pirates: Special Edition" was released to arcades in 2014 that adds two new levels and expands the ending. Many have likened it to Sega's Let's Go Jungle!.