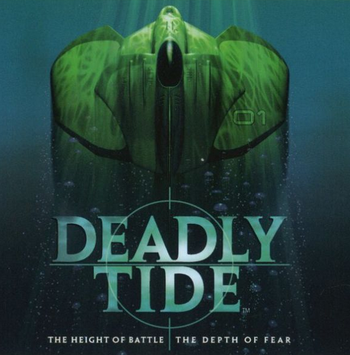 The height of battle. The depth of fear.

Before the Xbox, before Halo, even before Age of Empires, there was Deadly Tide; a Rail Shooter developed by Rainbow Studios (now THQ) and released by Microsoft in 1996 for PC.

On January 10, 2445 A.D. (That was 450 years into The Future back in the day, for those keeping score), the aliens entered our Solar System. Humanity did not know much about them, except that they had entered our oceans upon arrival, their technology was far in advance of our own, and they were slowly flooding the planet. As seen in the game's intro movie, the Global Space Initiative's defence forces were unable to stop more than one of their gigantic ships and the planetside navies didn't fare much better.

Five years later, the Earth Oceans Alliance is preparing a counterattack with a new, experimental hydrofighter called the Hydra that can handle the extreme pressures at which the aliens operate. Unfortunately, the base at which they are being tested comes under attack from the aliens and only a few of them survive. As one of the few survivors of the attack (and certainly the best), it is your mission to strike back against the alien menace and save the world from ruin.