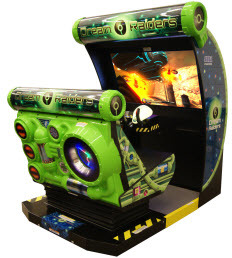 There's no real story to it. Basically you pick a scenario such a fighting a dragon, flying through a city, skiing down a snow mountain, riding a horse in the West West etc. Shooting down any obstacle that comes your way while the seat bounces and sways along with the action (think the Rail Chase games or Sega's Jurassic Park arcade).

While it can be played with one or two players, regardless you share a life bar which makes the game more intense. It is pretty short with only six stages (and three bonus stages, bringing it to nine total) but still quite fun.

And a demonstration of how the game works.

Dream Raiders has the following tropes: