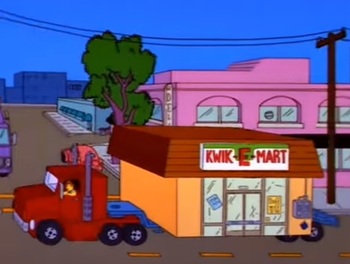 "I'm taking this thing to Mexico!"
"THEY'RE TAKING THE VAULT!!"
— Fast Five, where Vin Diesel does exactly that
Advertisement:

Important stuff is usually protected, making it pretty hard for a thief to just waltz into a place and steal what they want: Safecracking will take too long, the Password Slot Machine is too slow, the structure is too strong to Shoot Out the Lock and they'll be detected as soon as they try to hack into the terminal. But wait, why even bother trying to steal just what they want? They can grab everything surrounding their target, and figure things out once they get the hell out of there. Frequently, an entire building will be stolen, in one way or another.

This tactic can be necessary if the objective is protected by a Self-Destructing Security system. Trying to open the device at the scene without the necessary precautions could destroy what's being stolen, while taking the whole thing means someone could work on it later, at their leisure.

One of the oldest examples is stealing a safe and breaking into it later. This variant was popular in early radio dramas, and has become a Dead Horse Trope, as a safe not bolted down is rather silly. The modern variant usually involves blowing up whatever the safe is bolted to, and then stealing the safe.

See also Safecracking, "Open!" Says Me, Cutting the Knot, Dungeon Bypass, Myopic Architecture and Take a Third Option. Overlaps with Sky Heist when an aircraft is used to steal the surroundings. Can extend to Monumental Theft when a character's theft involve small buildings dragged by even smaller cars. Not to be confused with Sticky Fingers where someone may steal various items, both big and small, simply because they can.