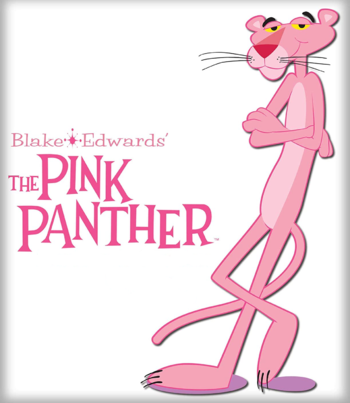 A popular cartoon series, and the last theatrical one created during The Golden Age of Animation.

The Animated Credits Opening of The Pink Panther visualized the pink, panther-shaped flaw in the titular diamond as an actual pink panther in an opening sequence created by DePatie-Freleng Enterprises. The credit sequence was so popular that besides becoming the Series Mascot of the live-action film series, the Pink Panther was given his own series of animated shorts.

The newly founded DePatie-Freleng studio's first short, "The Pink Phink," won the 1964 Academy Award for Best Animated Short Subject — the first time an animation studio had won one with its very first cartoon. Subsequent shorts put the Panther in situations ranging from the mundane to the fantastic, always with Henry Mancini's popular theme music somewhere in the score. Most of the shorts were silent, save for gibberish, sound effects, and music; attempts to give the Panther a voice were washes.

(The German translation of the series, however, featured an ever-present, rhymed voice-over reminiscent of Wilhelm Busch's work, spoken by the German voice of Sean Connery. It was also only in this dub that the Panther was given a name: Paul. But more often than not, the cutsey version "Paulchen" was used.)

Along with the Panther's shorts, DePatie-Freleng established a sister series in The Inspector, shorts inspired by the Breakout Character of the live-action films, Inspector Clouseau. The Inspector in these shorts, voiced by Pat Harrington, was a little more competent than his movie counterpart, though still prone to bad judgement calls, and was the general Butt-Monkey of the series even when he did succeed in the end.

Compare other, similar cartoon series produced by DePatie-Freleng: The Ant and the Aardvark, The Dogfather (a canine-focused spoof of The Godfather), Misterjaw, Roland and Rattfink, Sheriff Hoot Kloot, and Tijuana Toads.

The Pink Panther is notable as the last great theatrical shorts character, with shorts that ran through The Dark Age of Animation all the way up through 1977, a decade or more after Disney and Looney Tunes and all the other great theatrical cartoon studios had gone out of business. Even after the shorts were made specifically for television, they were still released to theaters in the early 1980s. After that, he became the focus of new, TV-only productions.

The character also starred in a few video games.

Pink Panther cartoons with their own pages:

Example of:
Made of Indestructium