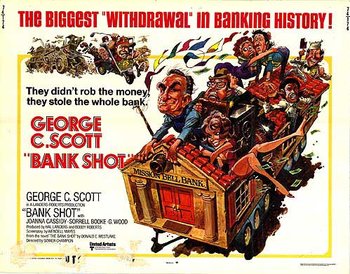 Bank Shot is a 1974 film directed by Gower Champion and written by Wendell Mayes. It was loosely based upon Donald E Westlake's novel of the same name, which was the second book of his Dortmunder series. The film stars George C. Scott, Joanna Cassidy, Sorrell Booke, and G. Wood.

A bank temporarily housed in a mobile home while a new building is built, looks like an easy target to break into. On the other hand, why not steal the whole bank, and rob it in a safer location?