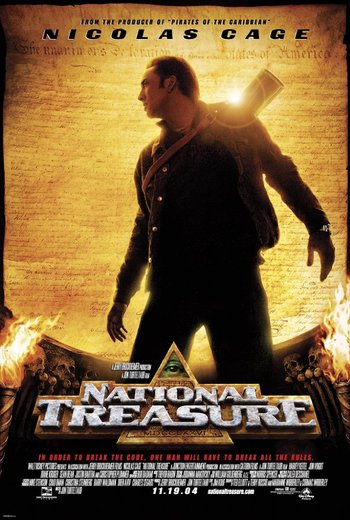 "I’m gonna steal the Declaration of Independence".
Riley: So let's recap: We've broken into Buckingham Palace and the Oval Office, stolen a page from the President's super-secret book and actually kidnapped the President of the United States. What are we gonna do next, short-sheet the Pope's bed?
Ben: Well, you never know.
— National Treasure 2: Book of Secrets trailer (lines cut from the finished film)
Advertisement:

A couple of Disney films from Jerry Bruckheimer that can be best described as The Da Vinci Code meets Indiana Jones with a side order of Assassin's Creed (though the films do predate the games a bit by a few years).

National Treasure (2004)
Ben Gates (Nicolas Cage) is the latest in a long line of the "treasure hunter" Gates family. The family myth is that the Founding Fathers of the United States hid a treasure that was gathered over the course of thousands of years and protected by the Knights Templar (although sympathetic in this story). Finding a financial backer in the form of the English Ian Howe (Sean Bean) and with his close friend and resident tech guy Riley Poole (Justin Bartha) they find the missing clue to lead them to the treasure's location. What they realize is that the next clue resides hidden on the back of The Declaration of Independence, and Ian reveals his Evil Brit side and intentions to steal it.

Ben and Riley decide to steal the Declaration first so that Ian can't. Doing this not only makes them an FBI target, led by Director Sadusky (Harvey Keitel), but they also have to dodge Ian and his team of mercenaries. Along the way they accidentally pick up the historical records agent Abigail Chase (Diane Kruger) and Ben's sarcastic father Patrick Gates (Jon Voight). The rest of the story leads to a Linked List Clue Methodology that takes them across many patriotic landmarks and (of course) finding "the treasure to end all treasures."

National Treasure 2: Book of Secrets (2007)
After the Templar treasure find, Ben and his father are well-respected historians making rounds at various universities and lectures. During one of their lectures, Mitch Wilkinson (Ed Harris) shows up with a missing page from John Wilkes Booth's diary that implicates their ancestor Thomas Gates being involved with the Government Conspiracy to kill Abraham Lincoln. The crux of the accusation involves the idea that Thomas was actually plotting to kill Lincoln instead of eliminating a part of a map to a treasure that would have given the South the financial ability to win the Civil War.

If the treasure exists, it will prove Thomas Gates' story. To restore his family's reputation, Ben reunites with Riley to set out on yet another set of clues leading to yet another treasure. Of course, the rest of his team show up eventually, including Ben's mom Emily (Helen Mirren). But at one point they run into a jam with the clue list, which requires a (highly illegal) meeting with the President of the United States to locate his "Book of Secrets."

A third installment had been discussed since the second film was released and remained in Development Hell for almost 15 years. In May 2020, Jerry Bruckheimer announced that not only was the third film's script finished, but a series for Disney+ was also in development; the latter was officially greenlit in 2021. Currently, the third film will feature the original cast, while the series (to be directed by Mira Nair) will have a separate cast centered around the new character Jess Morales. In 2022, it was revealed that Bartha would reprise his role as Poole for the series.

These films provide example of: