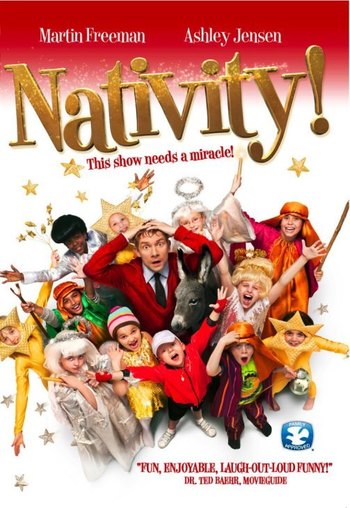 Nativity! is a 2009 British comedy musical film starring Martin Freeman, Ashley Jensen, Pam Ferris, Marc Wootton and Jason Watkins and directed by Debbie Isitt. It has spawned three sequels and a stage musical as of 2020.

The film focuses on Paul Maddens (Freeman), a hapless primary school teacher at St. Bernadette's Catholic School in Coventry, who has to deal with unruly pupils and irrepressible class assistant Desmond Poppy (Wootton) after the Head Teacher Pat Bevan (Ferris) tasks him with directing the school's nativity play. Smarting from his girlfriend Jennifer Lore (Jensen) leaving him at Christmas, a disastrous previous attempt at directing the Nativity and the condescending attitude of his old friend Gordon Shakespeare (Watkins) of the rival Oakmoor School, Mr. Maddens tricks the whole community into thinking his nativity play is going to be made into a Hollywood film. Soon, Maddens' lie spreads and he is forced to play along as enthusiasm and support for the St. Bernadette's Nativity Play gathers strength.

Tropes the sequels have: