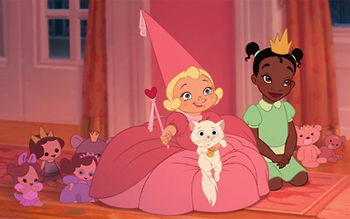 Charlotte (left) never grows out of that phase,
but Tiana (right) ends up marrying a prince.
Emily: Ah, I have a wonderful idea! Have you ever worn a tiara?
Rory: Well, when I was four...
Emily: You look like a princess.
— Gilmore Girls
Advertisement:

Little girls love princesses. If you ever meet a girl who's in preschool or kindergarten, she will probably have a fairy tale princess's attitude making her anywhere between a gracious but breakable cutie to a Tiny Tyrannical Girl who might feel entitled to a pony. Bonus points if she is a fan of the Disney Princesses.

She is or acts like she's seven years old at the most. Princesses Prefer Pink so that's probably her favorite color. She'll imagine herself as a pretty princess or pretend to be a princess bride. Her court will consist of stuffed animals and dolls. She might want a Prince Charming by her side as long as she still gets to be her Daddy's Girl, looking up to him as if he's a king. To emphasize this concept she might have a Sweet Tooth because Real Men Hate Sugar.

While somewhat rare, it can happen with little boys, but in a different way. At around the time they learn the differences between genders, they may have an infatuation with femininity and look at girls differently than before. In short, they may be more likely to have a crush on princesses during their phase.

If early childhood isn't specifically mentioned it might fall under Princess for a Day.

This trope is so strongly associated with childhood that a teenage or adult woman still clinging to this attitude cannot but come across as childish. Still, even those who grow out of it will still cling to a wistful shred or two: a taste for romance and a Prince Charming, or a pretty gown they twirl around in when no one is watching. The wedding industry in particular is built around letting women be a "princess" for a day. The prominence of this trope in real life is likely why so many works have a Princess Protagonist, or have a Gratuitous Princess inserted.

Compare Real Men Wear Pink (where there's a little princess in each manly man), Pink Means Feminine, Graceful Ladies Like Purple. Contrast One of the Boys.