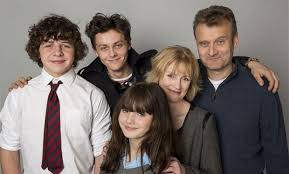 Outnumbered is a BBC1 half-hour semi-improvised sitcom, which aired its first series over two weeks in 2007, and its second over seven weeks in 2008. Five full series plus three Christmas specials aired in total, with the fifth series in early 2014 intended to be the last; however, a further Christmas special was broadcast in 2016.
Advertisement:

It follows the Brockmans, a family of five, who live somewhere in West London (ages are of as the final series):

(The series progresses in real time, meaning the characters age as their actors do)

The show is semi-improvised, with the kids being given the basic outline and then going from there. Not to be confused with the Super Solvers game of the same name.

Karen holds a funeral for a mouse killed by her parents.

Karen holds a funeral for a mouse killed by her parents.