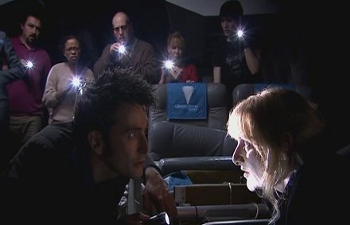 The Doctor, stuck in a bus with a race who abandon morality and reason in favour of their own selfish desires. Oh, and a mysterious mimicking demon as well.
"Now listen, all of you, for all we know that's a brand new lifeform over there, and if it's come inside to discover us, then what's it found? This little bunch of humans. What do you amount to? Murder? 'Cause this is where you decide, you decide who you are."
— The Doctor
Advertisement:

A "companion-lite" Psychological Horror Bottle Episode by Russell T Davies, written as a contrast to the "Doctor-lite episode" that directly follows it.

The Doctor and Donna go to an alien spa on a beautiful but uninhabitable planet called Midnight — because, all world-saving and death-avoiding aside, they really are just travellers. Donna relaxes at the hotel while the Doctor goes on a little sightseeing tour to a waterfall made entirely of sapphires.

"What Could Possibly Go Wrong?" asks the Doctor.

The shuttle bus takes four hours to get to the waterfall. The Doctor very quickly decides to tamper with the truly awful in-flight entertainment system and befriends all the passengers instead. There's the haughty professor, his timid but clever assistant, a bickering married couple and their moody teenager (who also plays Merlin), a bored hostess and a newly single woman by the name of Sky Silvestry, who really hates being newly single.

The fun begins an hour or so into the trip. First, it's revealed that a landslide has blocked the normal path and the shuttle bus is going to take an alternative route that has been mapped by air but is through a zone of the planet no human being has ever set foot on before. A bit later, the shuttle bus stops for no apparent reason halfway to the destination and, because the local star doesn't emit regular sunlight but super-deadly radiation, they can't leave the bus. The Doctor bluffs his way into the cockpit to check on things, and convinces Joe (the driver) and Claude (the mechanic) to open the blinds for a moment. The three of them utterly geek out at the sight — an entire plain of sparkling diamonds. Just before the blinds close again, however, Claude notices something. Something that looked almost like a shadow. A shadow running straight towards them.

The Doctor rejoins the passengers, who are beginning to freak out about the unexplained stop. Nothing to worry about, he assures them. The shuttle's life support means they have ten years' worth of air, and the rescue craft is only an hour away. "I can guarantee you, everything's fine."

Then something proceeds to bang on the sides of the bus, mimic the passengers' attempt at contact by knocking in response to their own knocks and finally rips off the drivers' compartment. Sky freaks out, thinking that it's her ex-wife coming to kill her, and the creature is drawn to her screams... and possesses her.

Sky, hunched on the floor, starts talking. She repeats anything anyone says. The Doctor is intrigued, if a bit scared, and tries to make contact with whatever's inside her. It's only when Sky starts talking in sync with her fellow passengers that everyone realises they're in a horror story.

The Professor's assistant recites lines from Christina Rossetti's "Goblin Market", which makes things a lot creepier. Also, Rose briefly shows up on a screen, screaming at the Doctor. Again. He doesn't notice.

The Doctor still tries to befriend the creature, knowing there's a good chance that it's just scared, or curious, or trying to be nice. The passengers, however, take a vote to throw Sky into the sunlight. And while the Doctor tries to talk sense into them, the creature realises that he is the cleverest person on the bus, and begins talking in sync only with him.

And now, the entire vessel is suspicious of him because of what are usually his strengths: his cleverness, his confidence, his take-charge attitude and the breadth and depth of his knowledge all mark him out as something other than human. Which he is, and that's the most dangerous thing to be in a mob of terrified humans. Nothing a sonic screwdriver could fend off.

He never gets a chance to convince them otherwise, because they're all savvy — just without the knowledge that the Doctor is this story's hero, making them Wrong Genre Savvy in all the worst ways. The Doctor makes one last attempt to communicate with what's inside Sky... and suddenly Sky is talking before the Doctor talks, while the Doctor is forced to repeat everything she says. The monster, now fully cognisant, pretends that Sky's completely back to normal. It's inside him, she says. It's inside him, the Doctor hears himself repeating. Cast him out into the sun, she says. Cast him out into the sun, the Doctor repeats. The group quickly devolves into a mob divided: most want to push the Doctor out of the ship, but both the professor's assistant and the hostess argue that Sky is hardly acting normal, and that the entity might have stolen the Doctor's voice instead of possessing him. They're shouted down as the men onboard grab hold of the Doctor and start dragging him toward the doors. Sky gloats, remarking, "Molto Bene! Allons-y!" The Doctor repeats this helplessly... which is when the hostess realizes that she and the professor's assistant were right, as those are things the Doctor says, not Sky. In the nick of time, she grabs Sky, throws open the nearest door, and sacrifices herself to destroy the alien and save the Time Lord.

This isn't one of those times when the Doctor just gets up and pretends he's fine. He's deeply shaken. So are the passengers: they are reeling in shock and shame, with the knowledge that they almost killed the wrong man. Val desperately tries to absolve herself, claiming she knew all along, but one look from the Doctor makes her stop.

Twenty minutes later the rescue team arrives, and the Doctor has learned a few painful lessons about mob mentality. This episode marks the beginning of a shift in the Doctor's attitude: he realises that while most Humans Are Special, some Humans Are the Real Monsters when they get scared. Even worse, the Doctor finds out that no one even knew the name of the hostess. Not even the Doctor.

The Doctor reunites with Donna, clearly shaken. Donna starts repeating him in jest — but the Doctor tells her not to do that, being absolutely serious this time, and looking like he's about to go crawl underneath a table.

Ready for the next episode...?

Ready for the next episode...?