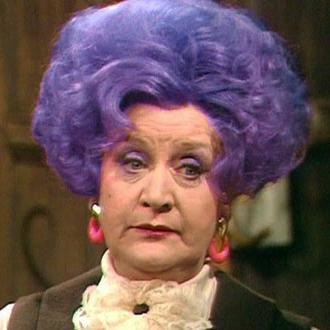 One of her MANY hair colors.
"Now the goose is on the table,
And the pudding made of fig, ahh,
And the blue and silver candles
That would just have matched the hair in Grandma's wig."
— Elmo & Patsy, "Grandma Got Run Over by a Reindeer"
Advertisement:

Grey hair has often been considered a sign of respectable old age. Unfortunately, not everyone becomes a Silver Vixen with age: those with one or two MC1R variant alleles will instead find that their hair turns an ugly dirty yellow. Older women in the 1970s and earlier who wanted to be gracefully grey would therefore get their stylists to treat their yellowing hair with a blue rinse, which, with luck, would tone down the yellow and leave a silver grey. It didn't always work - not everyone's hair absorbs the same amount of dye - and many older women walked around with distressingly blue hair. This led to this trope and also to the phrase "the blue rinse set", used in the 70s and 80s to describe older women in general (and still used in British politics to describe old Tory women who don't think women should participate in politics and make sure that happens by taking control of local branches of the Conservative Party).

As an Evolving Trope, considering that the elderly women nowadays spent their youth in the 1970s, especially those who were punk rockers, some daring elderly women are deliberately choosing to dye their hair blue, pink, or even more daring colors such as bright yellow, neon green, or fire engine red.

Sub-Trope of Covering Up Your Gray.